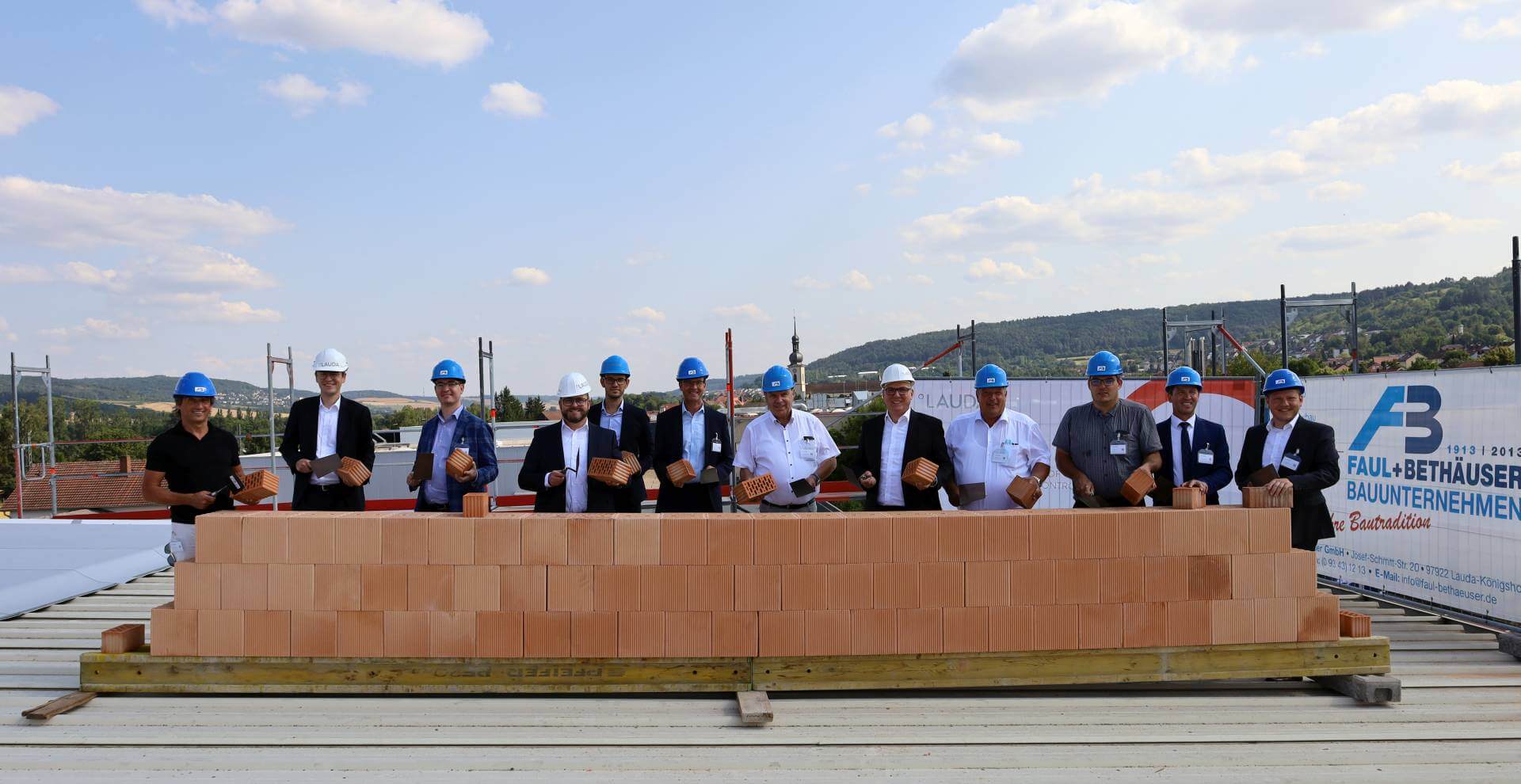 With a symbolic laying of the foundation stone, LAUDA DR. R. WOBSER GMBH & CO. KG celebrated the official start of construction for an addition to an existing office building on July 22, 2021. When the office building with production hall was erected and completed in 2008, an extension was already planned, reported Dr. Gunther Wobser, President and CEO of the company, in the presence of guests of honor, cooperation partners, the two other LAUDA Managing Directors Dr. Marc Stricker and Dr. Mario Englert, Production Manager Christoph Baumann, Daniel Eckl, Operations Technology and Services and Sebastian Fell, Marketing LAUDA.

“Especially in these Corona times, the laying of the foundation stone and the start of construction are both a sign of confidence and one for entrepreneurial growth due to an expansive order situation,” explained Dr. Gunther Wobser. Therefore, it is very important to create not only additional space for production, but also for office staff. As an ambitious expansion target, the world market leader for temperature control equipment and systems is aiming for a turnover of 250 million euros per year in the next few years. In order to meet the increased space requirements at the company’s central headquarters, the existing multi-storey building is being extended by a further floor.

Managing Director Dr. Marc Stricker estimated the building project planned and supervised by architect Klaus Schreiner at around 2,500 m³ of space on a gross area of 430 m². It provides for office space in an “open space concept”, including rooms for lounges and technical infrastructures. Completion of the building, with a total investment volume of around 1.1 million euros, and the start of occupancy are scheduled for March 2022, although the start of construction has been delayed somewhat due to the current shortage of building materials. “It was important to us to work with regional partner companies as far as possible,” Dr. Marc Stricker emphasized. Accordingly, 50 percent of the contracts have so far been awarded to companies from the region without exception, such as the construction company Faul und Bethäuser GmbH.

“This structural expansion is a further commitment by LAUDA to its main site in Lauda-Königshofen, which is enormously good for the town and its development,” emphasized Mayor Dr. Lukas Braun, who was among the small group of guests of honor at the ceremonial laying of the foundation stone at lofty heights, such as architect Klaus Schreiner, the two construction company managing directors Herbert Berthäuser and Norbert Groß, Peter Vogel, Chairman of the Board of the Sparkasse Tauberfanken, and the town’s master builder Tobias Blessing. At the same time, he said, it was a renewed sign and mosaic stone for the dynamic entrepreneurship of the Wobser family, which is anchored in the city. “However, it is not just about pure growth, but also about the constant search for new technical innovations and developments,” affirmed Dr. Lukas Braun. The mayor went on to attest to the company and its management that they are not “caretakers of the existing”, but are constantly thinking ahead in the field of temperature control technology. “I wish the family-owned company LAUDA to continue to advance its culture of innovation so dynamically and successfully,” Dr. Lukas Braun summed up.