THE FUTURE FIRMLY IN SIGHT 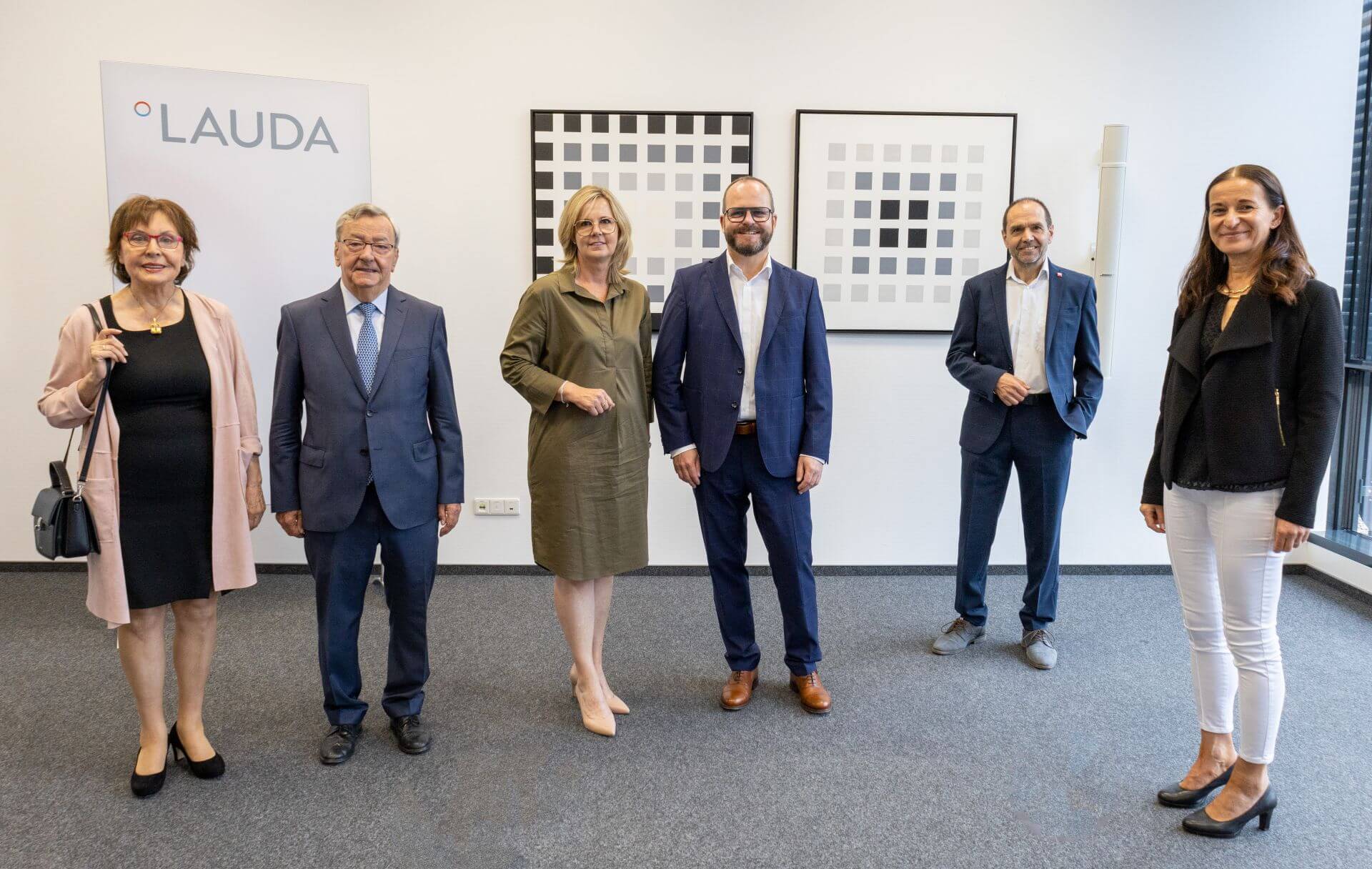 A special anniversary is being celebrated by LAUDA DR. R. WOBSER GMBH & CO. KG on July 1, 2022: Dr. Gunther Wobser, the President and CEO of LAUDA, started his career in the family business exactly 25 years ago. At a ceremony held at the company’s headquarters in Lauda-Königshofen, congratulations were extended not only by the managing directors, the LAUDA management team, the shareholders of LAUDA and the chairman of the works council, Elmar Mohr, but also by the mayor of the town of Lauda-Königshofen, Dr. Lukas Braun, and the managing director of the Heilbronn-Franken Chamber of Industry and Commerce, Elke Döring.

His career at LAUDA began in 1997 when he joined the company as Head of Marketing. After his uncle’s retirement, he became CEO in 2003 alongside his father, Dr. Gerhard Wobser. During their time together, until Dr. Gerhard Wobser’s retirement in 2010, he founded, among other things, the first foreign subsidiary, LAUDA France, to support and advise customers and agencies in the French market. Later, the subsidiaries LAUDA América Latina C.A., LAUDA China Co. Ltd. and LAUDA-Brinkmann LP, USA. were added. The internationalization of LAUDA was in full swing.

With LAUDA’s enormous growth, Dr. Gunther Wobser gradually brought support into the management team, starting with Dr. Marc Stricker (COO, 2014), Dr. Mario Englert (CFO, 2018) and Dr. Ralf Hermann (CSO, 2022). LAUDA continued to grow strongly over the next few years, founding its own foreign companies such as LAUDA Technology in the UK and acquiring LAUDA Ultracool in Spain, LAUDA-Noah in the USA and most recently three manufacturers in 2019 with GFL in Burgwedel near Hanover. Turnover and employee numbers have risen constantly over the years to 530 employees worldwide with a turnover of around 92 million euros. Under the direction of Dr. Gunther Wobser, LAUDA became the world market leader for tempering equipment and systems and has remained so to this day.

After a one-year stay abroad in the USA, the entrepreneur brought Silicon Valley to Tauber Valley. With new.degree GmbH, Dr. Gunther Wobser established holistic innovation management at LAUDA. Digitalization took hold – and not only in internal processes. The temperature control units and systems are pioneering the digitalization of temperature control technology with state-of-the-art operating concepts and cloud connection. With the Brainstation innovation center, the innovative approaches should also benefit the region.

The mayor of the town of Lauda-Königshofen, Dr. Lukas Braun, found appreciative words for the commitment of the jubilarian in his laudation: “You think ahead, you drive, you are an entrepreneur in the most original sense, an innovation driver for our region.”

“Always on the pulse of time and with full entrepreneurial power,” said IHK Chief Executive Elke Döring, “he always initiates new innovative processes.” She found special recognition for his commitment in the plenary assembly of the IHK and for the entire Heilbronn-Franken region. In addition, he has already headed the IHK Entrepreneurial Circle Main-Tauber, founded by Dr. Manfred Wittenstein in 1999, for ten years. Other well-wishers were Dr. Gerhard Wobser on behalf of the shareholders, as well as Dr. Marc Stricker and Dr. Mario Englert as part of the LAUDA management team. Elmar Mohr, Chairman of the Works Council, offered warm congratulations on behalf of the employees.

At the beginning of the year, under the leadership of Dr. Gunther Wobser, Drive250 was launched – the most ambitious strategic project in the company’s history: sales and the number of employees are to double within five years, while construction work and relocation measures accompany the first steps at the headquarters in Lauda-Königshofen. In Spain, LAUDA has invested around seven million euros in the construction of a completely new production facility. The signs continue to point to growth – with Dr. Gunther Wobser at the helm. The repeated record sales in recent months impressively demonstrate that the family-owned company can achieve its ambitious goals.

The success story of LAUDA is closely linked to the person Dr. Gunther Wobser, he is the face of LAUDA and has significantly shaped the awareness of LAUDA through his presence in public and in social media