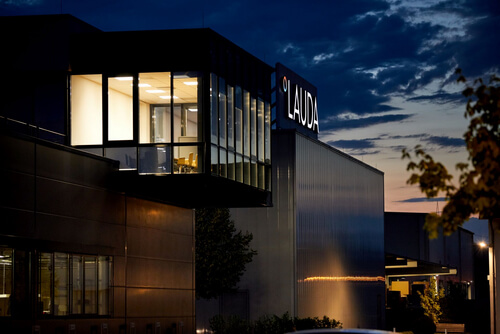 On September 23, the Microsoft Hybrid Work Tour will be presenting at the premises of LAUDA DR. R. WOBSER GMBH & CO. KG will present solutions for digital, location-independent and collaborative work. As part of a camper tour through five German cities, including Munich, Kassel and Berlin, Microsoft experts will be organizing workshops and live webinars on the topic of hybrid working between September 20 and 24.

A visible sign of the tour is that the participants will be traveling in converted motorhomes and vehicles. Among other things, webinars will be offered throughout the day, as well as live broadcasting, posting and tweeting from a vintage bus while at LAUDA. »We are delighted to be hosting the Hybrid Work Tour on September 23 at the LAUDA site in my hometown of Lauda-Königshofen«, explains LAUDA President and CEO Dr. Gunther Wobser. »Even before Corona, working with digital tools shaped our everyday lives, so the knowledge of the experts will certainly be of great interest to our employees«, continues Dr. Gunther Wobser.

On their German tour, Microsoft experts will introduce interested parties, followers and users to hybrid, location-independent, digital working in live webinars and on-site workshops. This will also include the live show »Alex & Ragnar«, which is well-known in the scene and will be broadcast live on YouTube that evening – with Dr. Gunther Wobser as a special guest – starting at 9 pm.

»As long-standing partners of Microsoft, we are pleased that the Hybrid Work Tour is making a stop in Tauberfranken outside of the metropolises«, clarifies Dr. Mario Englert, Managing Director at LAUDA and, among other things, responsible for the information technology of the global market leader. »The increased use of digitalization in the context of communication and also cooperation is a major, lasting effect of the Corona pandemic. LAUDA was and is also very well positioned and prepared in this regard.« Digital working methods and communication channels have now become established in the company, Dr. Mario Englert continued. »On September 23, LAUDA presented itself not only as a host for one of the largest software companies in the world, but also as a power user. Because the digita-len workshops and the uncomplicated exchange with experts benefit all LAUDA employees.«